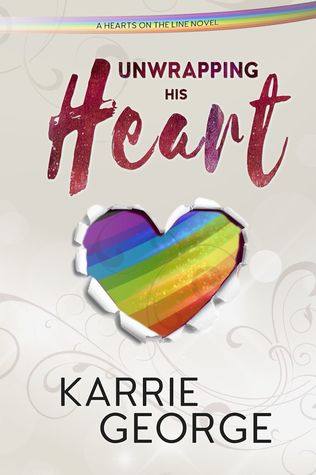 Book Title: Unwrapping His Heart (Hearts on the Line, #1)

A standalone book, but the first in a series

Matt is sexy, single, and fabulous. His career at a fancy magazine is going from strength to strength. He has great friends, a nice flat, and a healthy bank account. Life is wonderful.

In truth, Matt is unhappy. Convinced he’s not worthy of love, he flits from club to bar, in search of temporary amnesia from the demon on his shoulder that tells him he’s never going to find “the one”. Which is ironic, because his heart already belongs to the one man he knows he can never have—his straight best friend, Zeke.

Zeke has always dated women. He can’t fathom why he’s so upset about Matt’s latest lover, the wildly successful and attractive Dieter, but refuses to accept that he’s jealous, because to do that, he might have to do some soul-searching of his own.

Meeting Dieter turns Matt’s ordered life on its head, and opens Matt’s mind to the possibility that he can make a meaningful connection. However, to take a gamble on love, Matt has to learn to trust people with his secrets. And, more importantly, to overcome his shame regarding the one part of him he refuses to change. If he can’t – or won’t – learn to love himself, it’s doubtful anyone else will see the real man behind the mask.

The only question is whether he’s brave enough.

The hairs on the back of his neck lifted; he was coming closer. The thick carpet muffled his steps, but Matt’s internal compass had apparently shifted and now only had one direction.

Sørensen didn’t speak as he approached, and Matt didn’t move from his position, concentrating furiously on a Porsche as it made several attempts to parallel park. Then his breathing hitched as a hand landed on his shoulder.

“I think you should call me Dieter.”

“Okay.” It was an effort to force the two syllables out. Still neither of them moved. The air between them crackled and Matt swallowed. He wasn’t imagining it now; Sørensen – Dieter – was interested. He raised his eyes a fraction and risked checking the reflection in the glass. Before he could process anything, he was suddenly moving, then his back was pressed against the window as a mouth came down on his and his vision blurred.

Dieter kissed without mercy, his lips hot and hard and insistent. Matt barely had time to register that he tasted of mint before a tongue demanded entry, forcing rather than coaxing, and any resistance he might have summoned crumbled under the assault. He moaned and his head fell back, at the same time as his hands rose to grip the lapels of Dieter’s suit jacket to tug him closer.

A hand grasped the back of his head and strong fingers raked through his hair. Matt responded by sliding his arms under Dieter’s jacket and clawing at the fine material of his shirt, desperate to find skin. Pulling back suddenly, Dieter tore off the offending jacket, letting it drop to the floor, then did the same with Matt’s leather one, before mashing their mouths together once more. He ground into Matt, every roll of his hips sparking nerve endings that screamed for release as the pressure grew.

Matt didn’t usually kiss much. Frantic gropes in the dark corners of clubs didn’t lend themselves to more than getting off as quickly as possible, and he wasn’t yet sure he was in the market for romance, but something about the way Dieter tried to consume him was addictive. He couldn’t get enough. Air wasn’t necessary; getting more of everything, was. He realised he’d moaned again, and the noise evidently pleased Dieter. “Let me get you off,” he murmured, “are you close?”

Matt was close, too close. He turned his head suddenly, smacking it against the cool glass. Releasing his hold on Dieter, he pressed the heel of one hand against his groin, then used the other as a shield, palm up against Dieter’s chest. He could feel the galloping heartbeat under his fingers and the thought that Dieter was similarly affected pleased him.

“Gissa moment,” he choked out, willing his erection to subside enough to allow him to think.

To his credit Dieter didn’t crowd him, but his eyes were puzzled. “You don’t want to come?”

Matt laughed, a small, pained sound. “Yeah, but not in my clothes.”

Dieter smiled. “We can rectify that simply. But I think perhaps we are the same size. It would have been no trouble to lend you something. Come to bed with me, Matt.” He tipped forward and pressed their foreheads together gently, a direct contrast to his previous full-on attack. “You do want to?”

“Fuck, yeah. But not tonight.”

Because if we do that, you’ll think I’m a fucking weirdo and ditch me before we get as far as the bed. “You took me by surprise. Also, it’s not very professional if I’m going to be working for you.”

Karrie George considers caffeine the most important food group. She’d like to think of herself as delightfully eccentric, but has grudgingly accepted that “socially awkward weirdo” is nearer the mark. Books and music have been the backdrop to her life so far, and she sees no reason for this to ever change.

Karrie lives in the wilds of Scotland with a long-suffering spouse and several children. The voices in her head are great at encouraging her to leave the dust bunnies in favour of playing with plot bunnies. Possibly unrelated, she owns a number of pristine dusters.