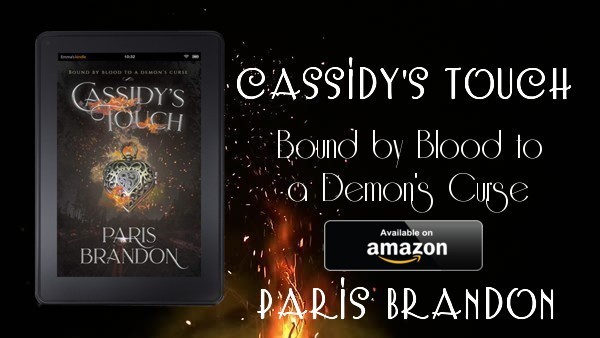 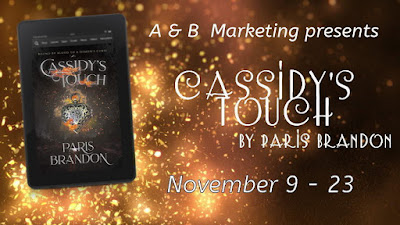 Cassidy’s
Touch by Paris Brandon
Book
1 in the Cassidy’s Touch series
Her gift is a double edged sword.
Will it be enough to save a cursed bootlegger from becoming a demon’s prize?
The least of reality
show host Cassidy Spencer’s worries is banishing the ghost of a handsome
bootlegger who disappeared after being accused of murdering his best friend’s
fiancée. According to an expert, her ghost isn’t a ghost and if she doesn’t use
her psychometric ability to find his body before the witch who cursed him does,
he could end up enslaved by a demon for eternity.
Chance Coraggio doesn’t
remember anything before he could walk through walls and that includes the
crazy woman telling him he’s been asleep for nearly a century. The life he
should’ve lived has been stolen. All the people he has ever loved are dead—and
it turns out the crazy woman isn’t as crazy as he’d hoped.
But waking Chance is
only half the battle. Now, both are bound by blood to a demon’s curse. To break
free, they must find out who is coming for them and why. Because the only
reason for a sleeping curse that has lasted almost a century lies somewhere in
a past that Chance can’t remember.
*Previously included
in The Shadow Files, limited edition boxed set.

PG13
Breathe
in. Breathe out. Imagine the audience naked. Her agent’s advice had never
failed her. The studio lights came up and Cassidy Spencer pasted a smile on her
face that lasted through her first two readings, a man wanting to know if the
antique baseball card collection he’d found had belonged to his father, and two
estranged sisters fighting over ownership of their grandmother’s silver tea
service.
Thankfully, one touch was all she’d
needed to see that granny had been the last to handle the teapot, and she’d
wanted the set to go to a distant niece. The cards had been a bit more
difficult. There had been decades of owners and handlers to sift through before
she’d gotten to the man who’d sold his prize possession to pay his son’s
medical bills.
Unfortunately, the emotional signatures
of anyone who had handled the objects possessed a corresponding energy that
added to what she’d been absorbing after dealing with the shooting schedule of
her Chicago-based reality series, “Cassidy’s Touch”, for the past two weeks.
Her hands shook with the effort to control the static current that was starting
to make her head pound.
One more reading and she was finished
until her new contract was negotiated.
She took a deep breath and brushed her
fingertips over the two-carat, marquise cut, blue-white diamond engagement ring
nestled in the carefully crafted folds of midnight-dark velvet. Displayed on
the low, satin-draped table separating her from her final guest, the sparkling
gem drew appreciative gasps from the audience as the studio lights brightened.
A close-up was provided, via a screen only they could see.
The last bit of stagecraft gave her a
few moments to puzzle over her final guest. She’d been trying to place him
since he’d walked onto the set a few minutes ago and sat down on the couch
opposite her.
To heighten audience anticipation,
nothing about the last guest was ever revealed; not their name, occupation or
reason they wanted an object read. Tonight’s guest had his own edge-of-his-seat
anticipation going on, but his identity eluded her.
Dressed in black from his turtleneck
and leather jacket to his loafers; his teeth were bared in a rigid smile that
was as fake as his spray-on tan. She gave him points for not coloring his gray
crew cut, but who wore a leather jacket during a July heat wave?
Her fingers tingled when the warm, gold
band revealed the image of the man seated across from her. No surprise there.
He appeared to have an emotional investment that was making him uneasy, but she
didn’t need to be psychic to guess whatever information he was seeking lay
deeper.
She closed her eyes and slid her
fingers over the jewel that warmed with the heat of her hand as she rolled and
pressed. Cradling the ring in her palm, she curled her fingers, and waited for
an image to unfold.
It came in a blur that sharpened
slowly. Santa Claus decked out in camouflage and wearing a jeweler’s loupe
would have made her smile except for the trepidation that colored his greed.
Her instincts were screaming the moment before the image faded. A violent jolt
burned its way up her arm and sizzled at the base of her skull. Exploded in a
flash of light that was there one second and gone the next as the scene
unfolded.
The ring’s owner had still been alive
and screaming, panicking because she couldn’t remove it fast enough. The
middle-aged blonde woman had tried to jerk her plump hand away because she’d
known the instant her assailant had decided his knife was the solution.
The man who’d cut off her finger was
tall and skinny. The detailed tattoo of a snake slithered across the back of
his right hand, its forked tongue curling around his gnarled forefinger. The
ring hadn’t gone over the first joint, but he’d placed it there to admire
before dropping his bloody treasure into a small, dark bag.
He turned as if just remembering his
hysterical victim and proceeded, without hesitation to stab her over and over,
counting each wound as if he’d been meeting a quota.
Cassidy blinked and struggled to open
her fist before the energy from the savage encounter melded it shut. Her
stomach heaved, and her hands began to shake. She dropped the ring back into
its midnight-dark velvet nest before the fingers of her right hand curled until
they formed a cramped fist, nails biting into her palm.
The woman’s terrified screams were
still ringing in her ears when she finally looked up—and remembered why her
guest seemed familiar. Jacob Atwell, the attorney for Brent Collier, the
murdered woman’s husband. The high-profile case had sparked a media frenzy
several months ago, along with most, but apparently not all of the grisly
details of her murder. 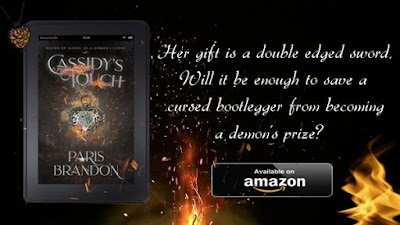