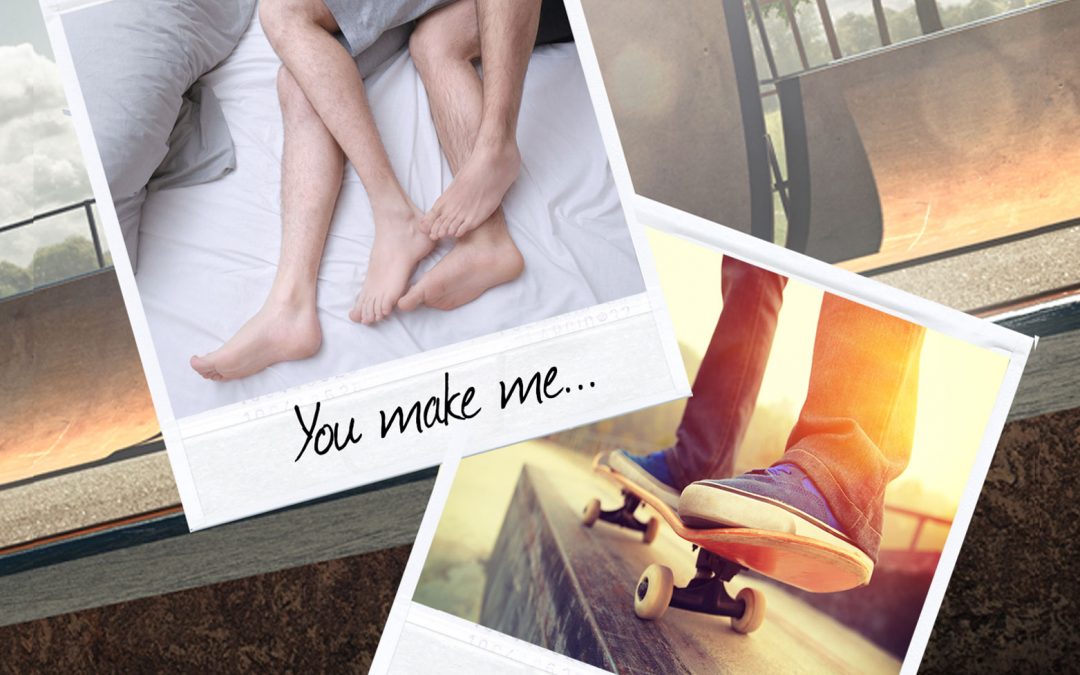 Book Title: Why I Need You

Fin is a recurring character from Why I Left You, but it is a standalone story.

Following the death of their parents, Fin put his life on hold to raise his little sister. He’s convinced her well-being is all that matters, even if it’s at the expense of his own. A chance meeting with Noah opens his eyes to the possibility of happiness. A happiness that could shatter the moment Noah discovers Fin has an eight-year-old in tow.

Noah has been living a lie for years. When he gets publicly outed, he gets kicked out of his parents’ home and business. Although he’s angry at being disowned, Noah knows it means he’s finally free to love whomever he wants. But in order to have a fulfilling and lasting relationship, Noah has to get past his repressed upbringing and inhibitions, before Fin walks out of his life.

In order to stay together, Fin and Noah have to be brave enough to be honest with themselves and each other.

Noah glanced up as their waiter wandered over to the table. Without meaning to, Noah found himself staring. The waiter looked hot in his uniform. He was wearing a crisp white shirt and a jet-black waistcoat, which intensified the grey of his eyes. A black bowtie was an especially cute addition, which added to his boyish charm. But it was the waiter’s smile which really grabbed Noah’s attention. It was a wide, easy smile that literally lit up the restaurant.

“Are you ready to order?” the waiter asked, his voice smooth.

Noah forced himself to zoom out from the smile and the perfect teeth to take in the waiter’s whole face, grey eyes and dark, swept-back hair. He dropped his gaze to the waiter’s name badge, which read ‘Fin’, then he looked away, planting his gaze onto his menu. God forbid anyone in his family caught him staring at a guy. He didn’t register what anyone else ordered. It wasn’t until Ruth kicked him in the ankle that he even realised the waiter, Fin, was talking to him.

“What can I get for you?” Fin asked, probably repeating the question for the second time, or maybe the third.

Noah hoped it wasn’t the third. “Uh, the Hawaiian pizza,” he said, cursing himself for mumbling over the words.

Fin nodded thoughtfully as he noted down Noah’s order. “You’re one of those guys.”

Noah’s eyes widened involuntarily. What did the waiter mean, ‘one of those guys’? How could his choice of pizza tell Fin anything about him?

“Who likes pineapple on pizza,” Fin clarified, his smile becoming wider still, revealing adorable dimples that made Noah’s legs turn to jelly. “You’d be surprised how divisive a choice that can be.” Fin’s gaze lingered on Noah for a couple of seconds before he glanced round the whole table. “Can I get anyone any more drinks?”

“I’d like a martini,” Liam said. He grinned at Ruth before saying, “Shaken, not stirred,” in an appalling attempt at a Scottish accent.

Noah exhaled as Fin wandered away. He couldn’t remember the last time he’d gotten so flustered just because he liked the look of a guy. Then again, he couldn’t remember the last time he’d been around a truly attractive guy whilst sitting at a table with his ridiculously conservative parents. He grabbed the thick white linen napkin and flicked it out, laying it over his lap just in case. He couldn’t trust his dick not to revolt against his head, which was screaming at him not to go gooey over some random guy.

Exclusive Excerpt/s (some blogs ask for this)

“The way I see it, we’re both bringing something to the table that’s making things hard for us,” Noah continued. “Something’s keeping you busy that you’re not willing to tell me about, and I’m not asking…”

Fin tensed at the unspoken ‘yet’ that was even more evident when Noah paused.

“And I can’t deal with any kind of physical contact when there’s even one extra person in the room.” Noah sighed. “But I’m going to work on it,” he promised. “Because I want to see where this thing we’ve started could lead. I don’t want to give up on the possibility that there might be an ‘us’ in the future.” He lifted his head a fraction and then gently pressed his lips to Fin’s in a slow, sensuous kiss.

It was a million miles away from the way Noah had kissed him the morning before. Fin leaned in to it, an equal partner this time rather than an object of desire. His stomach fluttered and his groin ached as the kiss continued. He twisted his hands so he could tangle his fingers through Noah’s. When Noah finally broke away, Fin remained motionless for a moment, his eyes still closed as he did nothing but breathe in the tangy scent of Noah’s aftershave. How was he falling so hard for someone he’d only known for a couple of weeks and had seen only a handful of times?

“So…” Noah said, his voice seemingly a million miles away.

Fin forced his eyes to flicker open. Noah was staring at him, his blue eyes wide and searching.

“Can we cut each other some slack?” Noah asked. “Are we going to keep seeing each other?”

Fin ran his hands over Noah’s shoulders and down his chest, his gaze never leaving Noah’s. “Tell me if you’re not comfortable.”

Noah was more than comfortable. He couldn’t imagine not feeling anything other than turned on by Fin’s touch. “What should I do?” he heard himself ask. If he’d been able to engage his brain, he probably wouldn’t have let such a dumb question cross his lips.

“Anything you want to,” Fin breathed as he leaned forward to kiss Noah in the centre of his chest where his breast bone dipped. “Or you could just sit there and enjoy.”

Fin continued to kiss his way down Noah’s chest, over his stomach, to the top of his jeans. Then Fin looked up at Noah with that damned cute lazy grin plastered on his face. He raised his hand and applied the slightest pressure to Noah’s shoulder. That was all it took to encourage Noah to flop onto his back. Noah’s heart was hammering hard against his ribs with anticipation. He felt stupid for admitting it to himself, but he really had no clue what Fin was going to do next, or if there was anything he was supposed to be doing in return.

He felt a tug at his belt and then the release of pressure against his waist as the button on his jeans was popped open.

“This okay?” Fin asked as he tugged on Noah’s jeans.

Noah nodded, sighing contentedly as Fin slowly relieved him of his jeans and boxers. He stared up at the ceiling, savouring the anticipation. Then he felt Fin’s lips press against his stomach again, hot against his trembling flesh. The slow, lazy kisses slowly moved down towards Noah’s groin, making him gasp. His eyes widened as Fin leaned over him and flashed him a grin before kissing him softly on the lips again.

Colette’s personal love story began at university, where she met her future husband. An evening of flirting, in the shadow of Lancaster castle, eventually led to a fairytale wedding. She’s enjoying her own ‘happy ever after’ in the north of England with her husband, two beautiful children and her writing.

Enter the Rafflecopter Giveaway for a chance to win a $10 Amazon Gift Card or one of 5 ebook copies of Why I Left You.

Stories That Make You Smile