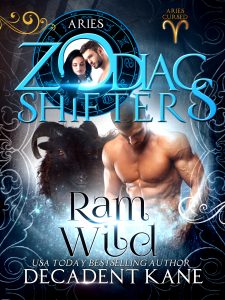 A nymph outcast tied to the land…

Echo is a curvy nymph, the black sheep of her kind. She doesn’t steal men. She even cut herself off from most of the world, except her forest. And Fahd, a magic eater, is consuming the essence within her trees. There’s only one way to stop him, the golden fleece. It took her nearly a year to get her hands on the fleece. And not even a day for the sexy ram shifter, Jace, to find her. However, she won’t be giving the fleece over lightly. Echo’s determined to give him the fight of his immortal life, but she’s worried it’s her own attraction she has to control.

Jace Argo is an Aries Guardian with one task; protect the mythical golden fleece. When the fleece is stolen right from under his nose, Jace traipses into the forest after the thief. He didn’t expect to run into a raven-haired nymph. He has four days before his curse forces him to leave town with or without the fleece. He will pull out every arsenal in his box of male charms to get what he wants.

A stolen mythical fleece brings them together, everything else will tear them apart.

This book stands alone within the series.

Jace grabbed Echo’s hand, pulling it away from the drawer, and placed it on his chest, wanting to feel more of her skin. Her fingers flattened over the material of his shirt, and warmth spread through him. A lust had a hold of him, and he wasn’t sure if it was his ram hormones or nymph magic, but he wanted to find out what kind of lace covered the sweet spot between her curvy thighs. He could grab a handful of ass and drag her right into him, but he refrained, barely keeping his amusement and hunger for her contained. “I’m not sure those human laws will apply to us, but, by all means, if you’d like to get the police involved, I’m sure they’d love to hear how my fleece ended up on your property.”

Echo yanked her hand back. Anger lit up her face with a tinge of red hitting her cheeks. He was getting to her. Good. But he’d be damned if that anger didn’t make her even more appealing to him. He had to force himself to breathe normally instead of releasing the groans struggling to escape him. Images of her beneath him writhing in pleasure made talking or thinking difficult.

He had to keep probing and looking though her home until he figured out where and how the minx was hiding the fleece. Lust didn’t outweigh duty. He would not be leaving her land without it. A tiny voice in the back of his head reminded him that fleece or no fleece, his curse would make him leave, but Jace pushed the thoughts aside. He had plenty of time, and what better way to kill it then with a perfectly gorgeous nymph.

“Do you have rocks in your ears? I told you what you seek is not here.” She crossed her arms, watching him closely.

The barely showing cleavage of her breasts pushing up from those lovely crossed arms enticed Jace, and he let his gaze wander down to take in her full figure. His jeans had tightened to an uncomfortable level around his hips. He looked back up, straight into her eyes as he adjusted himself in front of her, blatantly letting her know he was aroused and willing.

He had complete control of the situation.

She’s a mother of two girls and several furbabies. She’s engaged but has no intention of getting married.
Like most authors she’s been writing most of her life and has dreamed of being an author since the 5th grade.
When she writes, she writes to explore characters and a world first for herself. Then she revises, edits and publishes for readers.

Join the reader VIP list and get freebies:
http://madmimi.com/signups/371978/join

Keep up with all the latest Zodiac Shifters news here!