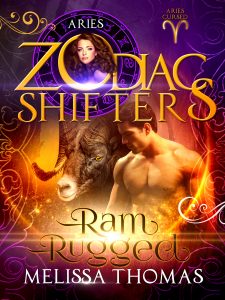 Once burned, twice shy…
After her heart is broken, curvy Mary Andre is determined to never risk it again. Besides, she has too much work and too many bills for her SoCal sheep ranch to bother with romance. Born under the Virgo sign, she has a can-do attitude. Everything is under control until her coyote-shifter ex-husband slaughters one of her flock. Mary goes looking for a hero-for-hire, but fate deals her a Greek god. Handsome Demetri Larsen puts the tempt into temptation. It takes every ounce of her willpower to resist her desire for him.

Cursed to wander the earth until he finds his soulmate…
For three hundred years, the immortal ram-shifter lived life on the road, chasing pleasure when not called upon to act as an Aries Guardian. For Demetri, desire and duty are about to collide head-on when a feisty redhead upends his entire world. In his determination to neither hurt nor be hurt, Demetri refuses to take a chance on the love that could set him free.

Demetri swooped in and captured her mouth with his own, kissing her with tender restraint. He cupped the side of her face, pressing his fingertips to the sensitive spot just below her ear. Breaking the kiss, he feathered a trail of licks and nibbles down her throat. It tickled something fierce. She lifted her arms and slid her hands up his chest, exploring the solid wall of muscle. Beneath his shirt, his physique was hard and defined. She dug her nails into his pecs, testing his power.

“Is this okay? Am I going too fast?” Demetri asked, pulling back a few inches. He hovered close, his lips just a tease away, promising heaven. She couldn’t wait.

“No, you’re perfect.” To her own ears, she sounded winded. Light-headedness swept over her even though she was breathing like she’d run a marathon.

“Good. Let me know if that changes.”

“I will. Should I turn on the lights?” The bold question left her blushing. Mary found herself once again at odds with the reckless fantasy she’d chosen to pursue. The real Mary Andre was modest and conservative, the sort of woman who only made love in the dark.

“Yes. I want to see every beautiful inch of you,” Demetri declared in a husky voice that sent shivers coursing down her spine.

“I’m not beautiful.” Gathering her courage, she crossed to the nightstand and turned on the lamp. The single bulb wasn’t all that bright, but to Mary it seemed like the glare of a thousand suns. It revealed her sensible four-poster bed covered in the quilt her grandmother had made and her battered antique dresser. The light also exposed Mary and her many flaws to scrutiny.

Back in the bar, Demetri had given her a taste of something delicious. She craved more, but no amount of alcohol or kissing could wholly silence the voice in the back of her head. It said this was wrong…a mistake…and she should shut it down now while she still could. The thing was, she couldn’t send Demetri away. That would be a mistake she’d regret for the rest of her life and beyond. So she squashed that awful insecurity along with the desire to cross her arms and cover herself.

“Come here.” Demetri beckoned to her. He flashed a smile warm enough to melt glaciers.

“Why?” She didn’t want to go, but her feet disobeyed. She shuffled over to him with her head held high and proud, even though her foremost reaction was to stare at the ground.

“Because I want to show you.”

If you enjoyed Ram Rugged, be sure to check out Ram Wild (Aries Cursed Book 2) by Decadent Kane.