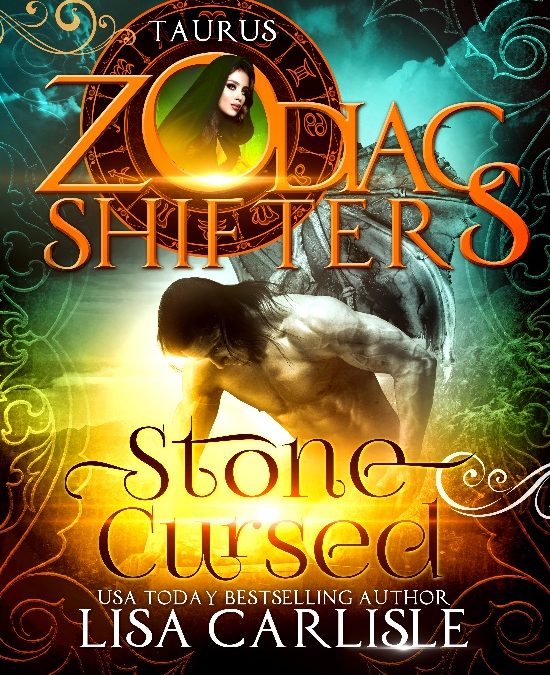 Ooh, pretty pretty! Look what’s out from the Zodiac Shifters this week. 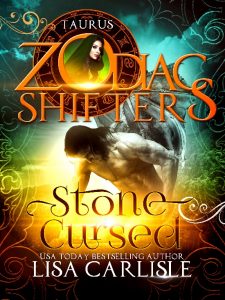 On his night off from sentry duty, gargoyle shifter Alec heads out for a night flight. When he spots a strange green light, he soars closer to investigate.

Veda has had doubts about Kai since they left their coven to seek ley lines in the Scottish Highlands. When he curses a gargoyle with dark magic, she’s forced to act. How can she free the gargoyle from his stone prison without invoking Kai’s notorious wrath?

Stone Cursed is a standalone novella in the Highland Gargoyles series.

If you’re a fan of the Zodiac Shifter novels, you’ll love meeting this Taurus shifter who is as sensual as he is stubborn.

Alec soared north past mountainous peaks wreathed by mist, a lone loch, and fog-covered forests to head to the Scottish coastline. An odd green light flickered in the distance. Was it the Northern Lights? He approached it. No. It originated from the earth not the skies, and it glowed with an unnatural hue.

His gargoyle instincts flared. Whatever this was had to be investigated. It hadn’t been long since the gargoyles had battled the sluagh, demons that had massacred almost an entire clan of gargoyle shifters. If this light signaled malevolent activity, he had to warn his clan.

He attempted to open a communication link with his father. Nothing. Alec tried again with others.

Bugger. No luck. He must have flown out of range. He’d have to investigate on his own.

Alec slowed his trajectory as he approached and searched for cover. Nothing would shield him near the source of the light, but the nearby forest would have to do. He dipped low and circled in, taking cover in the boughs of a tree.

A small cabin was situated hundreds of feet from the tree line. A tall, thin man wearing a black hooded robe and holding a staff stood with a petite woman with dark hair and a forest green cape in front of an enormous black cauldron with the strange mist.

They had to be witches.

He scowled at the discovery. Whatever magic they attempted to practice couldn’t be good. Even at his distance, he could smell the distasteful odor, one that reminded him of burning flesh and foul rot. His nostrils curled.

“Kai, are you sure about this?” The woman’s voice had a hint of an Eastern European accent, and spoke with an edge of uncertainty. “Something seems off.”

“Of course, I’m sure. This one isn’t enough. We need to find a stronger crossing.” The man’s accent was thicker, his tone heavy, almost a growl.

She raised her hand and dropped it. “I sense darkness. I feel it draining me.” Her voice wavered.

“You fear the dark end of the spectrum too much.” The man paced before the bubbling cauldron. “It’s the only way we can tap into our full potential.”

“We’ve left the coven, Veda,” he snapped. “Whatever rules they preached don’t apply to us here. We carve our new path forward, embracing all that the world has to offer.”

“I did not agree to that when I left with you.” Her voice hardened. “This was not what we had planned.” She raised her index finger.

He cocked his head and sneered as he eyed her. “Careful, my sweet. I’d hate to think you’re opposing me like the others.” The warning edge in his voice was as sharp as an icicle.

She took a step back. “I’m not. And nobody in the coven has either. Just because someone doesn’t agree with you doesn’t make it an all or nothing relationship. That’s what people do—they disagree and compromise.”

“Veda.” He laughed without mirth. “You’re so young. So naive.” He raised his hand and turned his head. “Wait, what is that?”

Alec’s muscles turned taut. Shite. Could they see through the magic that cloaked him?

The man narrowed his eyes at the woods. He pointed his staff as he strode forward. “Reveal yourself!”

Alec struggled to extract himself from the branches of the tree. He had to get out of here. Nobody in his clan knew where he was, and the man’s tone promised punishment. As soon as Alec found room to extend his wings, he hurled himself into the night, headed far from there.

“A gargoyle shifter,” the man’s voice twinkled with amusement. “Brilliant.”

What was so funny about that? Alec didn’t turn to look. Escape was paramount. He’d return with his clan, armed, to investigate. After only two flaps of his wings, a tingling spread over them. Hot shivers shot through his body, which then cooled and hardened.

And hardened even more.

He couldn’t flap them any longer. They were frozen.

His ribs tightened like a vice, squeezing his lungs. His heartbeat rammed up to rocket speed, slamming his blood through his veins.

But, then the flow slowed like a slow-moving stream, tightened his muscles. He flailed his arms in a desperate attempt to stay aloft, but failed. His limbs hardened.

Lisa Carlisle is a USA Today Bestselling author of romance and suspense. She loves stories with dark, brooding heroes and independent, caring heroines. Her travels have provided her with inspiration for various settings in her novels. She lived in Japan, backpacked alone through Europe, and worked in Paris before returning to the U.S. Now she lives in New England with her husband, two children, two cat, and too many fish.